2014 was a year of big growth for me. Having joined B-School, and begun working with my first business coach, I was suddenly surrounded by incredible entrepreneurs who were doing some amazing things.  Even though I felt like the class dunce, being in the company of these people made me see what was possible.

I did have one slight business tangent: My clients told me they loved my guided meditations and wished they could keep them. So, In 2014, I released a meditation CD!

This was a classic tale of focus on what you want and allow the Universe to support your goal into becoming a reality. Your job isn’t to worry about HOW something is going to happen. The Universe will open all sorts of magical doors for you. Almost five years later, sales of my CD are still going strong on Apple Music.

Lesson One – Be wary of “tangent” business distractions, like creating a CD

Whilst I don’t regret creating it, I can now see this wasn’t the best use of my time. My focus should have been on income generating activities and growing my audience at that stage.

Back to my online business, I felt so “behind”. Everyone seemed to have things sorted with their online courses, opt-in’s and lead-magnets. I didn’t see how an in-person, home-based business could be anything different.

Despite holding regular Vision Board workshops, my client base was no more than a 30 mile radius of my home town in Hertfordshire, England, but I wanted more.

I set the crazy intention that I wanted my business to go global. When you want something enough, you will find a way to make it happen …

On New Year’s Eve 2014, I made my Vision Board and wrote out my intentions. I put it out there to the Universe “I want my business to go GLOBAL”. I had no idea how this was going to happen, but I knew I was ready.

In April 2015 a live streaming app called Periscope was launched. Many of the B-School community were using in, including one of my mentors, Denise Duffield-Thomas.

For two months, I was totally hooked on watching other people’s live broadcasts. Even though I wanted to join them, I was absolutely terrified to press the Go Live button.

I got great advice from Denise: announce publicly you’re planning to go live – and that’s what I did. (Public accountability works every single time)

Periscope quickly become my number one Social Media platform. On June 2nd 2015, I did my first broadcast and was literally OBSESSED with the app for the next year.

I quickly built a large following. I did tapping broadcasts, angel card readings, took my viewers with me on holiday and really allowed my audience to get to know me. I was a “featured scoper” many times and became a Periscope VIP. I started to offer EFT sessions via Skype and had clients book from all over the world.

Lesson Two – Allow your audience to get to know you.

During my first year on Periscope, I provided hours of free content. Apart from my one to one Skype sessions, my business had reached a plateau. I was also at a big cross-roads in my life.

By the summer of 2016, I prayed for financial abundance, as things were getting a bit desperate. I also prayed for guidance: Should I return to my corporate career or could I really make a go of this online thing?

When you pray – get ready to receive the answer.

I knew I wanted to create an online course, but I wasn’t sure how to get started. I asked my community what they wanted me to create. The answer was loud and clear – they wanted Tapping Into Abundance.

This felt a little ironic as I wasn’t feeling hugely abundant myself, but I knew that tapping relieved my anxiety around money on many occasions. I had even successfully tapped for receiving ‘money out of the blue’.

While meditating on this on holiday in France, I had a divine download. I honestly couldn’t put pen to paper fast enough. The ‘voice’ was loud and clear – this course is for YOU – do the work. An outline of the seven core modules of Tapping Into Abundance just poured out of me, but I knew I still needed a guide.

He came in the form of James Wedmore and his incredible online programme, Business By Design.

James was launching his flagship programme for the very first time whilst I was in France. I saw the free three-part training and knew this was the answer. I bought the programme the day the doors opened, pretty much maxing out my credit card, but knew I had to act on my intuition with faith.

Lesson Three – Trust your intuition, when it comes to courses and mentors – I knew I HAD to work with James. Sometimes it is more of a case of “I can’t afford NOT to do this”.

To shift your feelings from I can’t afford to “How can I make this happen” check this out:

I have heard the phrase “the transformation is in the transaction” many times. This couldn’t have been truer for me.

I set to work immediately, putting James’ strategies in place. As soon as I returned from France, I launched my beta programme for Tapping Into Abundance with 60 members (mostly from my Periscope audience) and I recouped my investment for Business By Design within two weeks!

One of the big pulls to join BBD was a two-day live event in Laguna Beach the following January. His combination of mindset and business meant I just knew I had to be there to meet him.

I headed to California for the first of five trips to James Wedmore’s events over the next couple of years. I had the honour of speaking and tapping onstage in front of his ever-growing audiences.

The moment I joined BBD, miracles started unfolding in my life. Within three months, my Vision Board workshop was featured in the Daily Mail, and I then had press coverage in Psychologies and Grazia magazines.

All of a sudden, my one to many model wasn’t limited to local in-person workshops anymore and I could see the enormous potential. Then I had a crazy idea – what if I could teach my Vision Board workshop virtually via Live Stream?

In November 2017, I made another significant investment in my business: I joined James’ Next Level coaching mastermind group. This was the first time I paid five figures for coaching.

Although this was a super scary investment – once again – I recouped my investment within a couple of months.

If you are a business owner with aspirations of growing or scaling a business online either with an online course, membership site or coaching programmes, I highly recommend you check out James’s free ebook, Hardwired for Entrepreneurship

In May 2018 I decided, on a whim, to launch a weekly interview show on my Facebook page called Big Vision TV.

I figured out the technology, booked my guests and once more hit the broadcast button. Over 30 guests later, the show recently celebrated its first birthday and I have just announced that Big Vision TV the Podcast is coming soon! (INSERT BIG VISION TV SCREEN SHOTS)

In November 2018, I made the big decision to return to my maiden name, Melanie Moore. So, after nine years in business, I went through a rebranding exercise. I now felt ready to play a much bigger game.

In May 2018 I decided, on a whim, to launch a weekly interview show on my Facebook page called Big Vision TV.

I figured out the technology, booked my guests and once more hit the broadcast button. Over 30 guests later, the show recently celebrated its first birthday and I have just announced that Big Vision TV the Podcast is coming soon! (INSERT BIG VISION TV SCREEN SHOTS)

In November 2018, I made the big decision to return to my maiden name, Melanie Moore. So, after nine years in business, I went through a rebranding exercise. I now felt ready to play a much bigger game.

This is now an annual event that coincides with the New Moon nearest the solstice at the midway point during the year. It is my vision that thousands of people will gather annually to set powerful intentions, get clear on their vision and make their most epic vision board.

Mark your calendars: Next year’s date has already been announced – Sunday June 21st 2020.

So what have been my biggest lessons in the last five years?

And lastly 10. You were not put on this earth to play small, dream BIG!

“Our deepest fear is not that we are inadequate. Our deepest fear is that we are powerful beyond measure. It is our light, not our darkness that most frightens us. We ask ourselves, Who am I to be brilliant, gorgeous, talented, fabulous? Actually, who are you not to be? You are a child of God. Your playing small does not serve the world. There is nothing enlightened about shrinking so that other people won’t feel insecure around you. We are all meant to shine, as children do. We were born to make manifest the glory of God that is within us. It’s not just in some of us; it’s in everyone. And as we let our own light shine, we unconsciously give other people permission to do the same. As we are liberated from our own fear, our presence automatically liberates others.”

FINAL and most important piece of advice,

The theme of our conversation is business evolution. I have shared with you how I moved from a home-based career to having five-figure months running an online business.

Join us on my @iammelaniemoore Facebook Page Friday 26th July at 12pm Pacific/ 8 PM UK time. In the meantime, while you’re waiting for this interview, sign up for James’ FREE video training series which is going to BLOW YOUR MIND, just like it did for me three years ago. 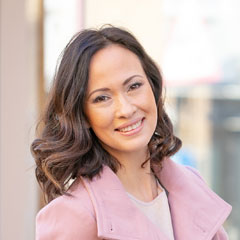 I help impact driven visionaries transcend their limiting beliefs, so that they can gain the clarity they need to fully commit to their vision and impact their world. I do this through my live broadcasts, social media posts, coaching programmes and online courses.

Tapping Into Your Big Vision

Unless you know what you want, the Universe cannot give it to you.

Get crystal clear today on your next steps with my free Big Vision Clarity worksheet and take action today.

Grab a cuppa and watch my free Manifesting Masterclass now